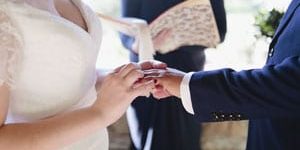 The history of the Italian wedding ring phenomenon traces all the way back to ancient Roman wedding culture, and has been an ongoing tradition ever since. However, the true meaning and symbolization of the engagement ring had a different meaning back then compared to present day.

Today, the engagement ring is a physical token of love, commitment, and happiness with a typical gold or silver ring incorporated with jaw dropping diamonds. In the early stages, the woman was presented a plain, iron ring to wear on her left hand. Instead of symbolizing love and everlasting commitment, this was seen as a public mark to a legally binding contract that has been made between the two families involved in the engagement. Once given, there was not an acceptable reason for not following through with the married on either the bride or groom. Since marriage was viewed as unavoidably binding during this age, that is why iron came to be the material of choice. Much like the contract was unbreakable, so was the make of the bride-to-be’s ring. For the groom, even after the actual marriage ceremony has taken place, they do not wear any physical token, such as a ring, for their marriage.

As we know, the traditional wedding engagement ring has come a long way from a solid iron band. As more advanced practices were adopted over time, the material of choice upgraded from this steel Italian wedding ring to gold or silver to prevent rusting that iron was prone to. Coincidentally, as this change in material began, a change in the views correlated to a couple’s engagement changed as well. At this time, the rings’ material signified not only the strength of the couple’s bond between one another, but it also represented the groom’s trust in his potential bride for his wealth that he is presenting her. Additionally, this newfound engagement band no longer represents a contract, but a promise of dedication and is seen as a sentimental gift to his loved one. If the man’s family already owns a ring, it can be passed down to the son to keep this token within the household, a practice that is still used today.

Once diamonds were incorporated into Italian wedding rings, the meaning behind the band itself as well as the views on marriage continued to evolve with time. As we travel further into modern Italian wedding culture, a tradition where the future groom commonly serenades his potential bride before presenting her his beautiful ring of choice. Talk about an act of love! The addition of the diamond incorporated an extremely sentimental value into this modernized proposal. Not only did it symbolically represent his eternal love for her, but it was interpreted that the diamond itself was created by the powerful flames of love and devotion.

The scope of historical value behind the engagement ring is extensive, and the meaning behind each stage has continuously evolved. What once started as a legally binding contract with an iron band has upgraded into a beautiful silver or gold ring accentuated with luxury diamonds of all sorts of shapes, sizes, and colors.