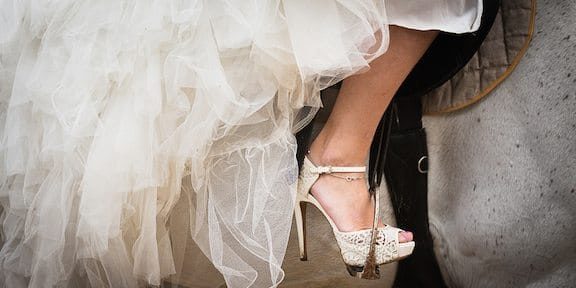 Some brides have dreamed of their wedding dresses since they were young girls in grade school.  They would fantasize about their special white dress and imagine themselves feeling like a royal princess.  As they grow up through their teen years and during early womanhood, they see gorgeous pictures of wedding dresses in magazines, at other weddings, and in storefront windows.  Most young women already have an idea of the fit and style they want even before they are engaged! Once they are engaged, their dreams come true as they try on different gowns until they find “the one” that makes their eyes pop and heart beat faster.  They purchase the gown of their dreams and make a rather dramatic entrance at the beginning of their ceremony when all eyes are directed to her.  A bride says her vows and becomes a wife in her beautiful gown.  But after the wedding what does a bride do with it?  This is a great question because most brides neatly wrap up their dress to put in a closet to save and occasionally take it out during reminiscent periods. However, we have a much more crazy and bizarre idea for all our brides who are up for a bit of fun.  If you have been reading some wedding magazines and blogs, you might have heard of the concept of “trash the dress.”  This is a very unique and contemporary concept of using your wedding dress is a photo-shoot that is the complete opposite from a bridal shoot.  In these photo-shoots, the bride is wearing her dress but is “trashing” it in a very artistic manner. The bride can be playing around on the grass or dirt with her dress or she can be on the beach and in the water with the sand.  The pictures that are generated from this shoot are very different because the bride and groom are having fun in the pictures, but it isn’t the clean and typical fun seen in bridal pictures.  Many of the times the bride is in the water with her groom and the dress is getting drenched.  We have a few ideas for our brides who want to join in the “trash the dress” concept. Like mentioned earlier, trashing the dress in the water is very common.  In Italy, we have many gorgeous bodies of water that you can have as a backdrop for your pictorial.  The various lakes we have would make this a memorable occasion and it is ideal for if you had your ceremony and reception at a lakeside venue. Another idea is going in the dirt or outdoor area.  This is a great thought if your wedding was a countryside located venue.  During the wedding, a bride was most likely careful with her dress and where she stepped, but now she doesn’t have to!  Rolling or lying around in the grass is a great shot or angle to capture. Although this is a rather new and some would say strange tradition, this concept is photographing beautifully and allows you to have fun in your wedding dress.  After all, the bride can save her dress in pristine condition for a lifetime; however, having pictures of  the bride and groom having a blast in the photographs carry much more value and sentiment.